Persona Research in Under 5 Minutes

Well-researched personas can be a useful tool for marketers, but to do it correctly takes time. But what if you don’t have extra time? Using a mix of Followerwonk, Twitter, and the AIchemy language API, it’s possible to do top-level persona research very quickly. I’ve built a Python script that can help you answer two important questions about your target audience:

What are the most common domains that my audience visits and spend time on? (Where should I be trying to get mentions/links/PR)What topics are they interested in or reading on those sites? (What content should I potentially create for these people)

You can get the script on Github: Twitter persona research

A quick introduction to Watson and the Alchemy API

The Alchemy API has been around a while, and they were recently acquired by the IBM Watson group. The language tool has 15 functions. I’ve used it in the past for language detection, sentiment analysis, and topic analysis. For this personas tool, I’ve used the Concepts feature. You can upload a block of text or ask it to fetch a URL for analysis. The output is then a list of concepts that are relevant to the page. For example, if I put the Distilled homepage into the tool, the concepts are: 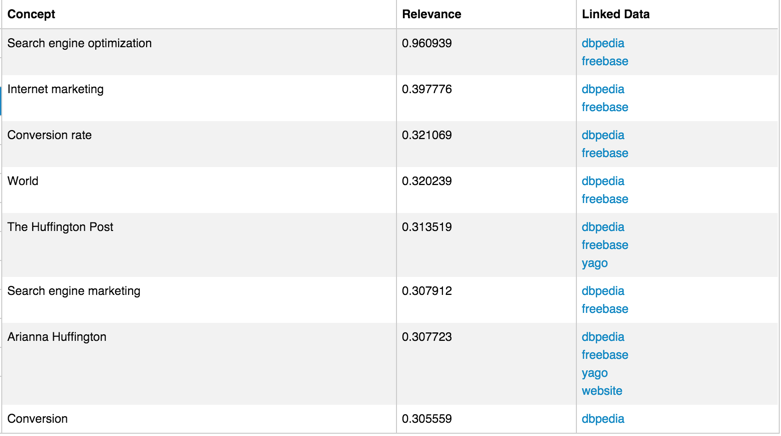 Notice there are some strange things like Arianna Huffington listed, but running this tool over thousands of URLs and counting the occurrences takes care of any strange results. This highlights one of the interesting features of the tool: Alchemy isn’t just doing a keyword extraction task. Arianna Huffington isn’t mentioned anywhere on the Distilled homepage.

Alchemy has found the mention of Huffington Post and expanded on that concept. Notice that neither search engine optimization or Internet marketing are mentioned on the homepage, but have been listed as the two most relevant concepts. Pretty clever. The Alchemy site sums it up nicely:

“AlchemyAPI employs sophisticated text analysis techniques to concept tag documents in a manner similar to how humans would identify concepts. The concept tagging API is capable of making high-level abstractions by understanding how concepts relate, and can identify concepts that aren’t necessarily directly referenced in the text.”

My thinking for this script is simple: If I get a list of all the links that certain people share and pass the URLs through the Alchemy tool, I should be able to extract the main concepts that the audience is interested in.

To use an example, let’s assume I want to know what topics the SEO community is interested in and what sites are most important in that community. My process is this:

Follow the steps below. Sorry, but the instructions below are for Mac only; the script will work for PCs, but I’m not sure of the terminal set up.

How to use the scriptStep 1 – Finding people interested in SEO

Searching Followerwonk is the only manual part of the process. I might build it into the the script in future, but honestly, it’s too easy to just download the usernames from the interface.

Go into the “Search Bios” tab and enter the job title in quotes. In this case, that’s “SEO.” More common jobs will return a lot of results; I recommend setting some filters to avoid bots. For example, you might want to only include accounts with a certain number of followers, or accounts with less than a reasonable number of tweets. You can download these users in a CSV as shown in the bottom-right of the image below:

Everything else can be done automatically using the script.

Step 2 – Downloading the script from GitHub

It’s easy to sign up using the links below:

Once you have the API keys, you need to install a couple of extra requirements for the script to work.

The easiest way to do that is to download Pip here: https://bootstrap.pypa.io/get-pip.py — save the page as “get-pip.py”. Create a folder on your desktop and save the Git download and the “get-pip.py” file in it. You then need to open your terminal and navigate into that folder. You can read my previous post on how to use the command line here: The Beginner’s Guide to the Command Line.

The steps below should get you there:

Open up the terminal and type:

You should now be in the folder with the get-pip.py file and the folder you downloaded from Github. Go back to the terminal and type:

usernames.txt – This is where you will add all of the Twitter handles you want to researchapi_keys.py – The file with your API keys for Alchemy and Twitter

In the api_keys file, paste the following and add the respective details:

Save and close the file.

At this stage you should:

Have a username.txt file with the Twitter handles you want to researchHave downloaded the script from GithubHave a file named api_keys.py with your details for Alchemy and TwitterInstalled Pip and the requirements file

The main code of the script can be found in the “get_tweets.py” file.

To run the script, go into your terminal, navigate to the folder that you saved the script to (you should still be in the correct directory if you followed the steps above. Use “pwd” to print the directory you’re in). Once you are in the folder, run the script by going to the terminal and typing: “python get_tweets.py”. Depending on the number of usernames you entered, it should take a couple of minutes to run. I recommend starting with one or two to check that everything is working.

Once the script finishes running, it will have created two csv files in the folder you created:

I did this process using “SEO” as the search term in Followerwonk. I used 50 or so profiles, which created the following results: 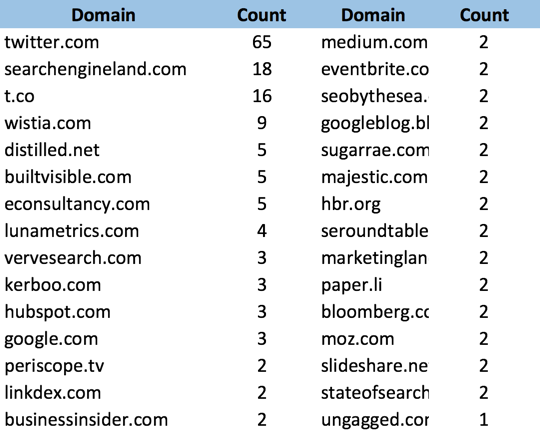 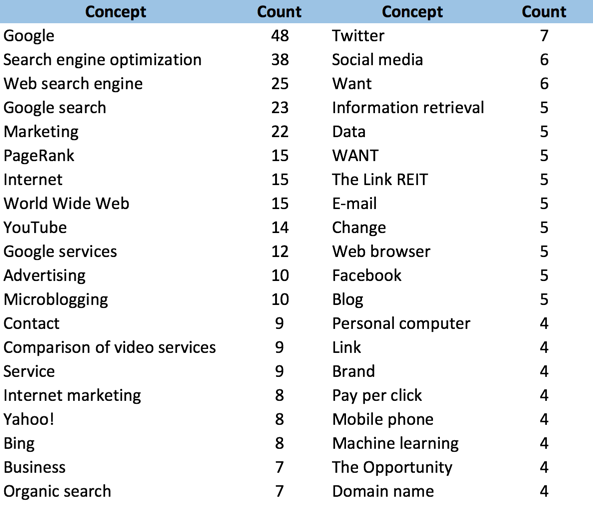 For the most part, I think the domains and topics are representative of the SEO community. The output above seems obvious to us, but try it for a topic that you’re not familiar with and it’s really helpful. The bigger the sample size, the better the results should be, but this is restricted by the API limitations.

Although it looks like a lot of steps, once you have this set up, it’s very easy to repeat — all you need to change is the usernames file. Using this tool can get you some top-level persona information in a very short amount of time.

Give it a try and let me know what you think.